LATEST BLOGS FROM ARTEFACT OF THE MONTH

On 26 August 2018 it will be 250 years since Captain James Cook set sail in the HMS Endeavour from Plymouth. The aim of the expedition was to measure the transit of Venus in 1769; to investigate the existence of the disputed southern continent `Terra Australis Incognita’; to look for previously undiscovered lands in the 'South Seas’. There are lots of events and activities remembering this occasion including a fascinating exhibition at the British Library but did you know there is a direct connection between the snail specimens collected on Cook’s first expedition and a family of snails of which ZSL coordinates the conservation breeding programme?

Partula snails are a genus of small Polynesian tree snails, they grow to a maximum size of approximately 2cm and feed on decaying plants. Originating from the Polynesian Islands of the South Pacific, Partula snails provide insights into evolutionary genetics due to their varied habitat-specific adaptations. The International Partula Conservation Programme has been co-ordinated by ZSL since 1994, it involves a managed breeding programme for currently 15 species of Partula snail in zoos worldwide, together with extensive work in the species natural range areas with local conservationists and government agencies.

According to S. Peter Dance in his book on shell collecting, the first voyage of Captain Cook was the most productive in terms of natural history collecting. On the voyage was Joseph Banks, a wealthy young man with an interest in natural history and travel, Daniel Solander a Swedish naturalist and proétgeé of Linnaeus, plus artists employed by Banks to illustrate his collections and the areas visited on the voyage. Solander probably collected the Partula shells on this first voyage.

The type and first-named Partula collected were named Limax faba Martyn, 1784 (Bean snail)  and collected on Raiatea, Society Islands on one of Cook's expeditions. This is the earliest illustration I can find of Partula in our collections. The image is from a collection of 110 bound, uncoloured plates entitled Figures of the non descript shells, collected in the different voyages to the South Seas since the year 1764, published by Thomas Martyn. London: Martyn, 1789. 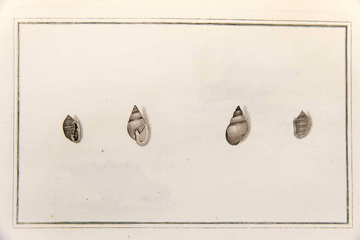 Martyn’s names were not consistently binomial (following the Linnean system of Genus and species) and so are not used but Gmelin in 1791 (13th edition of Systema naturae) validated the names as Helix faba but mislocated it as from Tahiti.

According to Richard Hough, by the following year the material from the Cook expedition reached the French malacologist Jean Guillaume Bruguiere. Subsequently the shells seem to have been passed on to Jean Baptiste Louis d’Audebard, Baron de Férussac who named the genus Partula. His shell collections were subsequently deposited at the Paris Museum but incorporated into the general collection (Dance).

Many shells were collected on Cook’s voyages, some 'officially’ and some by the crew for sale to dealers as following the first expedition the crew realised there was a market for exotic shells. As a result, shell specimens were widely distributed in collections throughout Europe. According to Gerlach (2014 and 2016) other specimens from Solander were bought by Lorenz Spengler for his collection in Denmark. They later moved to the Danish Royal Natural History Museum, later the Zoology Museum of the University of Copenhagen. These were used in the illustrations in Neues systematisches Conchylien-Cabinet, published in 1768-1829. This series was started by Friedrich Wilhelm Martini and continued by Johann Hieronymus Chemnitz after Martini's death in 1778. The 1795 volume includes a large number of Cook's specimens. This plate, No.169, features some of the shells collected on the voyages. The centre shell is the Common Northwest Neptune, Neptunea lyrata. It was brought back from Vancouver Island by someone travelling with Cook. (Dance and Heppell)

There are some images of Partula in the same volume: 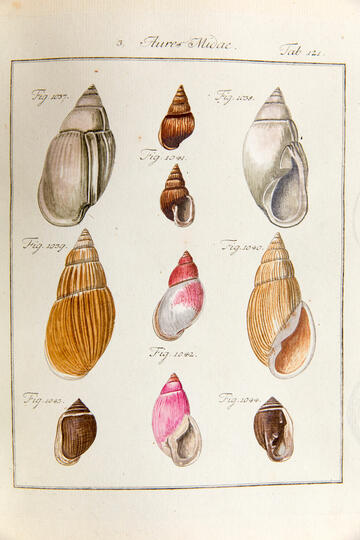 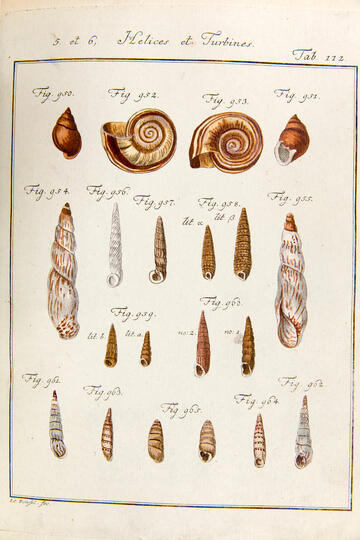 William Harper Pease accumulated a large collection of shells from Pacific Islands while he was based in Hawaii from 1849 onwards. He collected both land and sea shells. He published papers based on his collections in our Proceedings of the Zoological Society.  Some of these will be published as Hidden Gems and made open access as part of our celebrations in memory of Cook's expeditions and the part they played in collecting specimens of Partula.

I hope you have enjoyed this brief blog, I have included Gerlach's books in the `further reading' list if you would like to know more about early collecting and describing of Partula specimens.

Figures of the non descript shells, collected in the different voyages to the South Seas since the year 1764, published by Thomas Martyn.  London: Martyn, 1789.

A French version of Martyn’s Universal Conchologist has been scanned and can be viewed here The Partula shells are in scan no. 193.