Meet the fish which predate dinosaurs

Find out about Project SIARCReport your shark tag

There are over 500 different species of shark.

We at ZSL are experts in the field of shark research and work all over the world with our partners to study and conserve several different species.

Sharks are incredible fish which have used their lengthy time on the planet (the earliest sharks date back to around 450 million years ago!) to perfectly adapt to their surroundings.

Sharks are known to get through an average of 30,000 teeth in a lifetime. They consistently generate new teeth in their lifetime, their gums acting like a conveyor belt. If a tooth breaks in the front row of the gums, a tooth from the back will move forward as required.

There can be a huge variation in the size of different shark species – the largest known shark alive today is the whale shark, which can grow up to 40 feet in length and weigh up to 4.5 tonnes. At the other end of the spectrum is the dwarf lantern shark, which can fit in the palm of your hand. These curious fish are found in very deep water, so few people ever see them.

Angel sharks are a group of large, flat-bodied sharks – they can grow up to 2.4m in length. They are slow growing, with low reproductive rates, and are usually found submerged in sandy habitats in coastal waters. The habitat preference of angel sharks leaves them particularly vulnerable to fishing and habitat degradation.

At ZSL, we are working collaboratively with experts to protect angel sharks and bring them back from the brink of extinction through the Angel Shark Project (ASP). 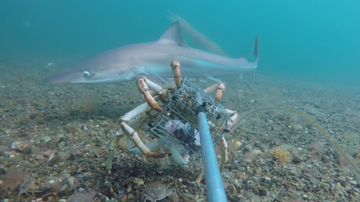 The Tope shark is also known as the School Shark, Soupfin Shark, Snapper Shark, and the Vitamin Shark.

Tope sharks can grow up to 190 cm long and live for over 50 years. They mature between 10 to 17 years old and only give birth to pups every two to three years

They are listed Critically Endangered globally on the IUCN Red List of Threatened Species. They are often accidentally caught during fishing activity.

At ZSL, we are working collaboratively with experts to conserve Tope and bring them back from the brink of extinction through the Project SIARC. 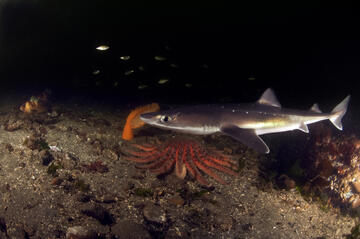 The Spurdog shark is also known as the Spiny Dogfish, Cape Shark, or Piked Dogfish. This slender shark has sharp spines in front of their first and second dorsal fins. They can grow up to 1.6 m in length.

They live on the continental shelf of temperate seas worldwide, including the Northeast Atlantic. Can inhabit deeper waters up to 900m, but usually found in waters shallower than 200m.

They are a schooling shark with gestation periods of up to 24 months and a long generation time of up to 40 years, which makes it vulnerable to overfishing. The Spurdog is listed as Vulnerable by the IUCN Red List.

At ZSL, we are working collaboratively with experts to conserve Spurdog and bring them back from the brink of extinction through the Project SIARC. 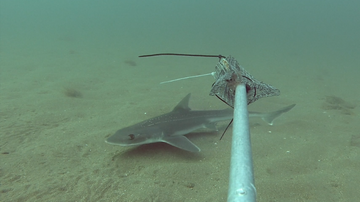 These sharks are commonly referred to as ‘Hound Sharks’. Starry Smoothhounds are smaller sharks, growing to a maximum size of 140 cm. They normally have a scattering of small, bright white spots along their back, which give them their name of ‘starry’.

They are found at depths of up to 200 metres and feed almost exclusively on crustaceans. The Starry Smoothhound is listed by the IUCN red list as Near Threatened – meaning that their population trend is decreasing and one step away from being vulnerable to extinction.

As part of our ongoing conservation project, The Greater Thames Shark Project, we are looking for help. This project has recently started and there is so much more to find out about these amazing creatures.

If while fishing you catch a shark that has a small, yellow ZSL.org tag below its dorsal fin, please report it, so can understand more about sharks in the Thames Estuary.