A pioneer in describing birds and mammals of Nepal

An introduction to Brian Houghton Hodgson

Brian Houghton Hodgson (1800-1894) is widely recognised for the great progress he made in describing the birds and mammals of Nepal, and in recognition of this, his name is linked to the names of several mammals and birds. Realising that Nepal was virtually unknown to Europeans, Hodgson devoted the 23 years (1820-1843) he was posted there to study its peoples, customs, architecture, languages, religion and natural history. In natural history, Hodgson concentrated on the birds and mammals of Nepal, the Himalayas in general and Northern India. He wrote more than 140 zoological papers, ranging from descriptions of single species to checklists of the fauna, and presented ZSL with his manuscript notes and drawings.

Very much a polymath with a range of interests, Hodgson was attracted to zoology and in an 1833 letter to his sister Fanny said 'Zoology in the branches of birds and quadrupeds amuses me much'.*

The rich biodiversity of Nepal is a tribute to its diverse climate, altitudinal variation and geography. In total 118 ecosystems have now been identified, and the country is home to some of the world’s most remarkable plant and animal species, Hodgson had an amazing opportunity to collect and describe the animals found there.

Hodgson was successively between 1820 and 1843 Assistant British Resident, then Acting Resident and then from 1833 he was Resident. Once he left Nepal he spent a further 13 years in India, living in a bungalow he called Brianstone in Darjeeling. He was in Darjeeling from 1845 to 1858, when he returned to England.

ZSL is fortunate in having six manuscript volumes of his original bird drawings and extensive notes and two further volumes concerning mammals: circa 1078 pages on birds and 456 on mammals as well as much of his correspondence including letters from Joseph Dalton Hooker, Lord Stanley, P.L. Sclater, J.E. Gray, Archibald Campbell (see Hodgson Papers in our Archives catalogue). Hodgson presented his manuscripts to ZSL in 1874.

Hodgson trained Nepalese artists to paint watercolours of the animals in the style of zoological illustrations and built up an enormous visual reference of pictures. Rajman Singh illustrated many of the drawings in the mammal volumes and accompanied Hodgson in Darjeeling.

While some paintings are finished, the manuscripts also contain sketches, notes and measurements like a field sketch book; yet almost always these talented artists have succeeded in producing superb images, which were then annotated by Hodgson with scientific and common names, an indication of the locality and reference number. Often they include some text in a Devangari script.

Typically each drawing has a caption giving Hodgson's unique species number, a scientific name, common local names, and locality. Additionally, there may be many separate figures on anatomy, and copious notes on both sides of the sheet, including tables showing the animal's measurements and weight. Hodgson recorded the day and month but seldom the year, so that accurate dating of the drawings can be difficult.

Hodgson described many animals for the first time; he discovered many others but their valid scientific names and descriptions are attributed to other zoologists owing to the difficulty in communications 170 years ago.

ZSL Scientific Publications are making some of Hodgson published papers freely available online to celebrate the bicentenary and to coincide with our Symposium which is the focus of our celebrations. The papers were published originally in the Proceedings of the Zoological Society.

Update : We have scanned all the 14 volumes of Animals of India by Samuel Richard Tickell (1809-1875). There is one volume on mammals, one on fish, one devoted to reptiles, crustaceans and insects, the other 11 volumes are devoted to birds. They have been digitised and the scans can be accessed via our online catalogue. Tickell was related to Hodgson by marriage. He visited Hodgson and influenced the artists working with Hodgson. See our blog about Tickell for further details.

All the manuscripts of Brian Houghton Hodgson have now been scanned. Please access them via our online catalogue: http://library.zsl.org

For almost 40 years Brian Houghton Hodgson studied the mammals of Nepal and Darjeeling and discovered 22 new mammal species. The manuscripts contain information about the type specimens for these new species, some of these detail are unpublished making the information contained incredibly useful. The type specimens are those on which the species description is based.

He described the distribution, behaviour and anatomy of the new species and many other mammals. Providing such details about behaviour and distribution was unusual at that time but it does mean that the manuscripts and drawings are incredibly useful today in providing information to compare the current distributions and monitor how these may have changed. Amazingly he also recorded some migration details as well.

As well as being so informative and potentially useful, the drawings are delightful with their own charm and beauty. Do enjoy the few images below and look at the scans the whole of his two volumes on mammals in our online catalogue.

Additional information about the volumes on mammals

Roberta Davis, a ZSL Fellow has been volunteering in the Library and has transcribed some of the  pages of Volume 1 of mammals as a taster to give an indication of the contents. Please view the draft of Roberta's draft transcriptions of Volume 1 of Mammals.

The National Manuscripts Conservation Trust has provided funding for the conservation and digitisation of Volume 1 of Mammals. You can view the scans of this volume in the Library catalogue. Use our index for Hodgson's mammal manuscripts to find the pages for particular species or simply browse through the pages.

Volume 2 of mammals has been conserved and repaired with funding from the Mercers’ Company and the Leche Trust. The digital version can be searched from our online catalogue.

Carol Inskipp (author of A Himalayan ornithologist: the life and works of Brian Houghton Hodgson) copied all the Hodgson notes in English on the drawings of birds and mammals in the 1980s. With Carol’s help, we have transcribed these into electronic format. Use our index for Hodgson's mammal manuscripts to help you locate information about particular mammals in the scans.

Status of Nepal's mammals: the national red list 2012 is illustrated with some of the mammal drawings.

Information for this page has been obtained from: Brian Hodgson and the mammals and other animals of Nepal by Ann Datta, pp. 154-171 in The origins of Himalayan studies: Brian Houghton Hodgson in Nepal and Darjeeling 1820-1858 / edited by David M. Waterhouse, London: Routledge Curzon, 2004. (Royal Asiatic Society Books) The author lists mammal first described by Hodgson and some mammal species named after him.

Brian Houghton Hodgson's work on birds is his major achievement in zoology. He collected 9,512 specimens representing 672 bird species, 124 of being new science. Hodgson is credited with first descriptions of 80 bird species, while the rest are attributed to others who described species based on Hodgson's specimens; mainly the Gray brothers, John Gould and Edward Blyth.

As a result of his achievements, Hodgson's name is celebrated in the scientific names and common names of birds, and there is even a genus Hodgsonius.

His bird collections represent 3/4 of Nepal's total species, with his field descriptions being of particular use and interest as he was one of the first people to record such detail. With birds he recorded behaviour and distribution as well as anatomy, meaning that the manuscripts and drawings are relevant today in providing information to compare the current distributions and monitor how these may have changed. Similarly, his manuscripts contain information about the type specimens for these new species, some of these details are unpublished making the information contained incredibly useful. The type specimens are those on which the species description is based.

Additional information about the bird volumes

Dr David Lowther of the University of Durham is our Visiting Scholar. He had an open access paper published about Brian Houghton Hodgson in the Archives of Natural History – Patron’s review : The art of classification : Brian Houghton Hodgson and the “Zoology of Nipal” David A. Lowther Archives of Natural History 46.1 (2019) pp. 1-23. He has analysed Hodgson's collection of ornithology paintings and his work in the identification and classification of Nepalese birds, as part of his research into the development of zoology in Britain c.1820-1850. He is also working on an article about some Himalayan Mastiff's.

Shyamal Lakshminarayanan visited ZSL Library in the Summer of 2014 and has written about the bird manuscripts in his blog. In his helpful comments and insights he has identified some of the languages used.

A red list of the birds of Nepal was launched at ZSL's Symposium in February 2016.

Carol Inskipp (author of A Himalayan ornithologist: the life and works of Brian Houghton Hodgson) copied all the Hodgson notes in English on the drawings of birds and mammals in the 1980s. With the help of Carol Inskipp, ZSL has transcribed these into electronic format:

These can be used as a finding aid to consulting the manuscripts. The bird manuscripts have been repaired with funding from the Charles Hayward Foundation and will soon be scanned so that they can be accessed around the world via our online catalogue.

Edward Dickinson was appointed as Honorary Visiting Scholar in 2006-2008 to study the manuscripts in relation to bird identification and taxonomy. He was hoping to identify the 'type specimens', (i.e. the first specimens on which the species description is based) and to compile a list of species. Although he did not manage to complete this project, he has published several papers about the works in Zoologische Mededelingen as part of a series on Asian birds. His paper specifically about Hodgson is: Systematic notes on Asian birds. 52. An introduction to the bird collections of Brian Houghton Hodgson (1801-1894) Zoologischen Mededlingen, 2006, 80-5, pp. 126-136.

Information for this page has been obtained from: A pioneer of Himalyan ornithology by Carol Inskipp  pp. 172-188  in The origins of Himalayan studies: Brian Houghton Hodgson in Nepal and Darjeeling 1820-1858 / edited by David M. Waterhouse, London: Routledge Curzon, 2004. (Royal Asiatic Society Books) The author lists the bird species discovered by Hodgson.

ZSL Library Volunteer Roberta Davies has transcribed the English text for three of the bird species studied by Hodgson :

ZSL is active in Nepal with many conservation projects there and on 26 February 2016, ZSL will be hosting a Symposium about conservation in the region.

ZSL has taken a number of steps to increase awareness of the manuscripts and their use, some of these are detailed on the mammals and birds pages:

Further reading about the life of Brian Houghton Hodgson

If you'd like to view mammal and bird volumes of the Hogdson manuscripts in person, simply arrange an appointment with library staff to see these exciting materials.

Alternatively, you can download volume 1 and 2 of Hodgson's mammal manuscripts from the ZSL library catalogue online.

‘Further Illustrations of the Antilope Hodgsonii, Abel’ and ‘Description of the Wild Dog of Nepal’, Proceedings of the Zoological Society of London, 1833, vol 1, pp. 110-112 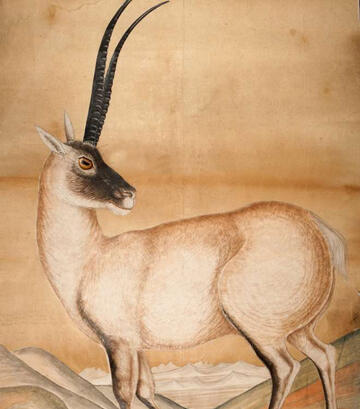 The first of these papers adds to Hodgson’s earlier observations about the anatomy, morphology and taxonomy of the Chiru antelope, Antilope Hodgsonii,and the second paper provides a description of the wild dog of Nepal,Canis primaevus, locally named Búánsú, including its appearance, morphology and behaviour.