Our experts have used satellite technology to monitor some of the world’s most remote and vulnerable coral reefs, and for the first time, observe multiple climate change related stressors from data freely available through Google Earth Engine.

With climate change creating a complex mix of detrimental impacts on these precious ecosystems through rising sea surface temperatures, stronger wind and changes in water depth, current and cloud cover, it is key for conservation scientists to take the combined effects into account when trying to evaluate and protect coral reefs. 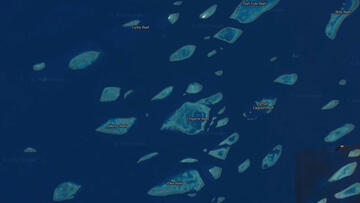 Satellite data has long been used to monitor surface temperatures of some of the world’s most remote and hard to reach marine habitats, but as revealed in a new study published this week in Remote Sensing in Ecology and Conservation, conservationists have gone one step further, using Google Earth Engine technology to investigate how changing environmental factors combine to impact shallow reefs in different ways.

The team created a Reef Environmental Stress Exposure Toolbox (RESET) from the readily available Google Earth Engine geospatial processing platform. Using the varied satellite data, they were able to map out dangerous combinations of environmental stressors caused by climate change and monitor the reefs all year-round.

They used data from 3,157 coral reef locations around the globe, including twelve major ocean ecosystem regions. These include the Chagos Archipelago, coral reefs off the coast of the Gilbert Islands in the South Pacific and in the Red Sea. To test the capabilities of RESET, occurrences of El Niño - a phenomenon of unusual ocean warming- were chosen as time periods during initial trials, to look at the toolkit’s ability to capture variability during these stressful climatic events, which are well known for causing damage to reefs such as coral bleaching.

Using RESET to look at the ‘environmental stress exposure’ to coral reefs at times when El Niño occurred compared to ‘usual’ conditions the study found that several elements, such as current, depth and metrics of sea surface temperature, combine to exacerbate stress during El Niño periods. In addition, the study found that the drivers of environmental stress on shallow reefs can be region and location specific, with different variables having greater impacts in some areas compared to others. 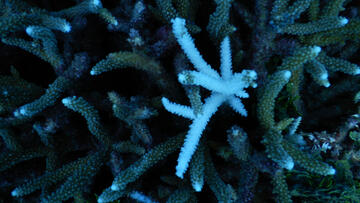 Coral reefs are crucial marine ecosystems, home to an abundance of flora and animal life but they are all individual with characteristics that depend on their location and influence vulnerability to climate change. The new toolkit can be used to investigate environmental stressors of shallow coral reefs, from local to global scales, and it is hoped that it will also form a blueprint for important future investigations into direct human impacts on coral reefs such as overfishing, pollution and artificial light.

ZSL Post-Doctoral Research Associate and lead author on the paper, Michael Williamson said: “The continued decline and degradation of the world’s coral reefs means that accurately monitoring and managing these valuable ecosystems, especially in remote locations, is vital.”

Free and accessible to anyone interested in the technology, the team believe that Google Earth Engine data could become a crucial and inexpensive piece of kit for conservation scientists, NGOs and even school children with an interest in the natural world.

Williamson added: “Using Google Earth Engine Technology, rather than just looking at sea surface temperature, we have devised a method to explore the impacts of multiple and combined stressors which are known to be impacting reefs. This method can be easily replicated to consider direct human impacts on reefs, and we plan to take this work forward as part of our research here at ZSL.”

Co-author and Lecturer in Physical Geography and Earth Observation at the Department of Geography, King's College London, Emma Tebbs said: “Climate change is having profound impacts on the marine environment, altering not just sea surface temperature, but also other variables such as ocean currents, salinity and wind. Satellites can now be used measure many of these variables from space. The toolbox we have created integrates multiple satellite datasets, allowing users to evaluate the environmental stress exposure of critical marine ecosystems such as coral reefs.”

Co-author and ZSL coral reef expert, Catherine Head said: Protecting coral reefs from the rapidly increasing threats and degradation they face is a delicate and complicated piece of work, and time is of the essence. We need the best tools we can get to make any sort of positive impact. We hope that this method will help give ocean conservationists a year-round, bird’s eye view of what is happening to some of the world’s most remote coral reefs, and help us to find solutions.”

When we join together everything is possible. People and wildlife can thrive, we can stop the decline and repair the fabric of life. We can rebalance the world and make real change happen for life everywhere.