Find out more about our workSupport our conservation work

ZSL and University of Oxford postdoctoral researcher Catherine Head has been studying life in reef habitats and their number one global threat, coral bleaching.

Here, she tells us why there’s still so much more to learn about these incredible ecosystems – and why she’s hopeful for the future of corals.

Four years into her research project on the coral reefs of the Chagos Archipelago, Catherine has lost none of her sense of wonder about working on these extraordinary habitats. “It’s a real privilege to have been able to study and see a reef habitat with such minimal human impacts,” she says. “We’re looking at the conservation value of coral reefs for the wider marine habitat in the Chagos Archipelago, how well connected these reefs are with others, and new ways of assessing the number of invertebrate species living on the reef by testing water samples for traces of their DNA.”

One of the biggest strands of Catherine’s work, however, has been investigating the reef’s resistance to mass bleaching events, which occur when the sea surface temperature rises acutely. “This causes corals to expel the symbiotic algae that provide them with the majority of their energy budget,” she explains. “Without the algae, corals can effectively starve to death.”

The same tiny algae are also responsible for the colours of many stony corals – hence the ominous bleaching effect that shows at a glance that corals have been affected by bleaching, or actually died. “When there’s been huge coral mortality, you’ll see areas of reef where all the coral have turned greyish and are now covered in algae, and you tend to see less fish around, as they obviously depended on the living reefs. It’s all quite eerie, compared to the vibrant colour and species diversity you see on healthy reefs – and obviously it’s devastating to see it,” says Catherine. 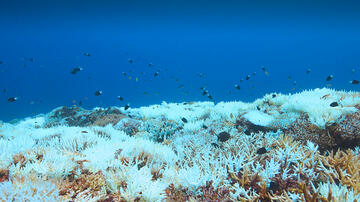 Chagos was affected by bleaching events in 2015 and 2016, as part of the third recorded global mass coral bleaching event that took place from 2014 to 2017. “We saw around 60% of the corals suffer mortality as a result, and a shift in species on the reef to corals that were more resistant to bleaching.”

However, there were some glimmers of hope. “There were obviously a percentage of corals that weren’t affected by bleaching; or were bleached but managed to survive, so Chagos reefs have shown some resilience. There was a large bleaching event in 1998, which the reefs recovered from in 10 years, and the early signs are that they are currently doing so again.”

Can we still save coral?

As Chagos shows, even the world’s most pristine reefs are not immune to global rises in sea surface temperatures. And if mass bleaching events continue to become more frequent, coral will have no time to recover from the repeated stress. So how optimistic does Catherine about the future of reefs, with further rises in sea surface temperatures expected? “The picture doesn’t look very rosy, but I think there is still hope, if we can just reduce our emissions in time.” 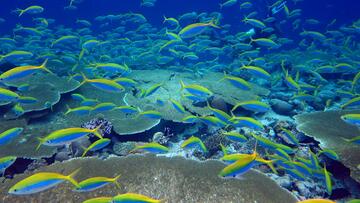 That will take global decision making and concerted progress on emissions targets – but in the meantime, science is our best hope of understanding how to help reefs survive climate change. “What we’ve learned from the Chagos Archipelago – an area that is relatively unimpacted by other anthropogenic (human) impacts – is that reefs do have the ability to bounce back from bleaching,” says Catherine. “But only if they’re given the time to do so, and they’re not struggling with local impacts such as fishing or pollution, so they can focus their energy budget on recovering. That’s why marine protected areas are so important – and why we must continue to study and protect areas like Chagos. Perhaps one day, coral larvae from this reef could potentially be used to reseed those that have been lost to climate change.”

Find out more about our work