The need for joined-up, global decision-making on climate action and biodiversity conservation has never been clearer than in the case of the world’s reefs.

ZSL has long been working to ensure those decisions are grounded in the best possible marine science. The tiny living organisms known as coral polyps are the architects of some of the most biodiverse ecosystems on Earth. The reefs they build provide vital habitat, feeding, spawning and nursery grounds for more than a million aquatic species, while around 450 million people rely on them for sustenance, coastal protection and livelihoods.

The enormous pressures on these priceless ecosystems are already clear to see. Coral bleaching, caused by rising ocean temperatures, is an all-too-visible marker of polyp stress or death. Between 2014 and 2017, Australia’s Great Barrier Reef lost half its coral to bleaching incidents. In the last 30 years, climate change, pollution and overfishing have resulted in reef coverage decreasing by more than 50%.

One third of remaining reefs are listed as threatened; but if CO2 levels continue to rise and hit the danger zone of 450ppm (parts per million), we could be talking about planetary-wide mass extinctions. Coastal communities will face devastating effects, from increased erosion and swamped shorelines to loss of food and employment. 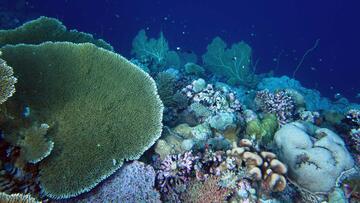 Corals on the brink

Unless economies worldwide can make the shift to a sustainable, low-carbon future, we may have to face the fact these dazzling and diverse habitats are not too big to fail. It’s essential that we put nature at the heart of global decision making, and empower wildlife conservationists and climate change scientists to work together towards effective outcomes – including reducing global CO2 levels to 350ppm.

ZSL scientists have long been at the forefront of reef research in the hope of better understanding how we can protect these complex ecosystems. In 2010, they helped ensure that the Indian Ocean Territory, centred on the Chagos Archipelago and home to the largest living coral atoll on earth, was designated as a marine reserve. Situated 1,500 km from the southern tip of India, this remote and protected place remains (relatively) undisturbed by human activity, making it a crucial research site for understanding how healthy reefs function.

ZSL’s ongoing research in Chagos Archipelago is often carried out collaboratively and pooling expertise with scientific partners from around the world. Work includes using new technology to create 3D maps and studying creatures dependant on the reef, such as reef sharks and seabirds.

Another project focuses on the impact of macro and micro plastic waste on nesting sea turtles, and will develop long-term strategies to enable systematic change, reduce single-use plastics consumption, and improve recycling practices.

Other ZSL reef projects include setting up community-managed marine protected areas (MPAs) in the Philippines, working with local people to understand fishing practices, educate locals about coral, and set up offshore guard posts to protect from illegal fishing.

And as one of six conservation charities that make up the Great British Oceans coalition, ZSL is helping the UK Government establish a ‘Blue Belt’ of over four million square kilometres of marine protected areas in UK Overseas Territories.