Invasive Species in the Thames

At ZSL we work tirelessly with partners and volunteers in the Thames estuary and the wider river catchment to protect and better understand the species that are found here, including invasive non-native species (INNS). 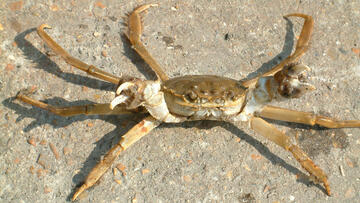 Why are there invasive species in the Thames?

The River Thames is particularly vulnerable to introductions of invasive non-native species (INNS) due to the dense human population and high level of marine traffic, and is now one of the most heavily invaded river systems in the world. Invasive species arrive in British waters via several means:

With suitable environmental conditions these species can colonise new waters. In the absence of predators, parasites or competition, populations of invasive species can rapidly multiply, exhausting resources used by native species or severely degrading their habitats.

How is ZSL monitoring invasive species in the Thames?

Since 2006, ZSL has been monitoring invasive species in the Thames as part of a long-term collaborative project. We want to know if any new species arrive in the river and how these new arrivals interact with the native species.

Every year in November, the weir at Richmond Lock is lifted to allow a portion of the river to drain naturally at low tide. We use this opportunity to scout the river bed for any species that are not native to this country's waterways. During the 2014 survey, the invasive quagga mussel (Dreissena rostiformis bugensis) was identified for the first time. This part of the river is home to populations of rare freshwater mussel, so it’s especially concerning that the quagga’s arrival will add to the pressures that threaten their future. 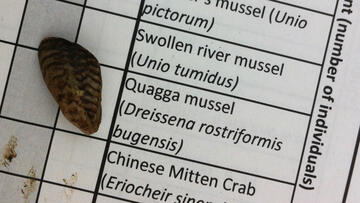 Our Thames invasive species project is just one of the ways we’re working to conserve wildlife in the UK.