A wildlife survey led by the Department of National Park and Wildlife Conservation (DNPWC), Government of Nepal and supported by ZSL reveals that Endangered Bengal tigers in Nepal have doubled in number for the first time in decades. While great news for tigers, these results highlight the equal importance of efforts to support communities living alongside growing tiger populations.

It’s official: wild adult tiger numbers in Nepal have increased from 121 to 355 since 2009. On this Global Tiger Day, the Government of Nepal, has revealed the results of their latest tiger survey, coordinated with ZSL (Zoological Society London) and other conservation organisations.

The news marks the biggest increase in the highly threatened species anywhere in the world in decades and is the result of years of dedicated conservation efforts.

Threatened by habitat loss and poaching for the illegal wildlife trade, global tiger populations plummeted from around 100,000 individuals in the early 20th century to 3,200 individuals in 2010 - occupying just 7% of their original range. However, in 2010, the heads of state in 13 tiger range countries met at the Global Tiger Summit and signed a declaration as part of a Global Tiger Recovery Programme, to double wild tiger numbers by 2022 – Nepal is the first country in the world to achieve this.

The survey, which ran from November 2021 to March 2022 was completed by mapping forests and protected areas into a series of grid systems and placing wildlife cameras or ‘camera traps’ (which capture images when something moves in front of them) around the regions.

Systematic tiger surveys have happened every four years since 2009. Since this year’s survey was completed in March, an expert panel reviewed the data from the count to confirm the positive news. Supported throughout by ZSL, the surveys have been made possible with the help of local communities, citizen scientists, volunteers, frontline workers from Nepali Army and DNPWC, and with support from conservation organisations including National Trust for Nature Conservation and World Wildlife Fund.

ZSL Nepal deputy country director and member of the technical committee informing the Nepal government’s report, Dr Bhagawan Raj Dahal said: “As we approach COP15, the importance of protecting biodiversity is in the limelight, and more must be done to protect key species, the habitat they rely on and the people living alongside them.

“We have worked with the national government in five protected areas across Nepal for some time. We help provide technical and financial support for the tiger surveys. Our conservation experts also work on the final report with the government which takes around 7-8 months to process everything we have captured.

“We also work very closely with communities in conservation efforts with a particular focus on reducing the risks of living alongside wildlife. Providing local people with a means of strengthening their income is key in helping to increase opportunities beyond the forest and protected areas where they are likely to run into large predators such as tigers.” 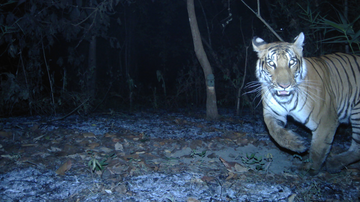 Tiger species used to roam across large expanses of forest and grassland, which is being rapidly lost to agricultural expansion, and development such as roads and other infrastructure outside the protected areas. They are also deliberately poached for the illegal wildlife trade: for their skins and for body parts for traditional medicines.

Alongside our main goals of helping to increase and protect tigers through effective management while supporting communities living alongside these animals, ZSL engages works with local communities to help combat wildlife crime and has helped the DNPWC to strengthen Community Based Anti-Poaching Unit.

ZSL focuses on the Terai Arc Landscape: a narrow strip of plains, forest and lowland hills, running for 600km below the Himalaya, linking Nepal and northern India.

ZSL Nepal programme development specialist, Shashanka Sharma said: “Terai Arc communities have a long history of living in harmony with their wildlife, and across Nepal many rural communities have robust rights to manage local forests, through Community Forestry.

“ZSL provide support for sustainable local livelihoods and protection of livestock. Almost 5 000 local people have benefitted from livelihood support such as micro-loan schemes, cooperatives that enable women to save, access to quick-relief funds for healthcare and other life costs, and the creation of almost 100 additional jobs in ecotourism.”

Although a huge cause for celebration, as tiger numbers increase, new challenges arise for local people living in close proximity to them – like those on the edges of national parks and within protected areas. ZSL has prioritised supporting these local communities for many years to help reduce conflict instances through providing predator proof corrals for livestock, building awareness of the presence of tigers and providing communities with alternative ways to strengthen their income outside of using forest resources, which helps to reduce their encounters with wildlife.

Shashanka Sharma said: “Although tigers prefer to avoid contact with humans, as their numbers increase and they come out of the strictly protected areas looking for prey and new space, there is a greater likelihood of ‘human-wildlife conflict’. Much of the rapidly growing human population in the area live well below the poverty line, and are dependent on forests for fuel, fodder, timber and grazing land. This is the place where most human-wildlife conflict take place, leading to predation of livestock and deaths and injury for humans and animals alike.”

Shashanka concluded: “Despite a high number of people living on the edges of protected areas, and significant wildlife trafficking routes, the Terai Arc landscape is home to exceptional biodiversity and provides the last great highway for wildlife in this region. Our conservation work would not be possible without the continued support and help of local experts and communities. Working alongside them is what makes much of our conservation efforts possible."

ZSL director of conservation and policy, Dr Andrew Terry said: “The success of tiger recovery highlights what can be achieved with collaborative efforts, but we know this is not the case across all the ranges of the different tiger species in Asia. These wide-ranging apex predators need large intact habitats with a healthy prey base. As to the world looks to commitments being made to scale biodiversity targets at the COP15 of the Convention on Biological Diversity, we need to support countries in their mission to recover species such as Bengal tiger. This requires the integration of nature into policy making, sufficient funding to support conservation, and empowerment of those living within these landscapes.”

You can help us to protect species and stop unique and threatened wildlife disappearing forever. Sign up to Back from the Brink, and each month we’ll take you to the front line of ZSL’s conservation work, with fascinating personal stories, videos and more from our teams saving wildlife around the world and behind-the-scenes in our Zoos. Support our work today by visiting Back from the Brink fundraising appeal.

Partners and funders involved with the tiger count and conservation efforts in Nepal include The Department of National Parks and Wildlife Conservation (DNPWC - the government agency of Nepal responsible for overall wildlife management in the country), National Trust for Nature Conservation (NTNC), the World Wildlife Fund (WWF) and ZSL (Zoological Society London). This project is supported by IUCN’s Integrated Tiger Habitat Conservation Programme, funded by the German Cooperation via KfW Development Bank. The contents of this article are the sole responsibility of ZSL and do not necessarily reflect the views of IUCN, the German Cooperation or KfW. Additionally, this work is supported by WildCats Conservation Alliance (WCCA - WildCats Conservation Alliance is a joint initiative of the Zoological Society of London (ZSL) and Dreamworld Wildlife Foundation), Panthera, Darwin Initiative and IWT Challenge Fund, and United States Fish and Wildlife Services.