Bringing 'ocean superheroes' from the brink of extinction

1,300 native oysters have been returned to waters in River Conwy as part of an ambitious restoration project to bring back these ‘ocean superheroes’ from the brink of extinction. The Wild Oysters Project, a partnership between ZSL, Blue Marine Foundation (BLUE) and British Marine aims to help restore healthy, resilient coastal waters around the UK.

Earning themselves the title ‘ocean superheroes’, native oysters (Ostrea edulis) provide huge benefits to coastal waters by helping to clean our seas and acting as an important habitat for marine wildlife. Declining by 95% due to human activities, native oyster populations have continued to decrease since the 1800s, meaning their benefits to the ocean have been lost. 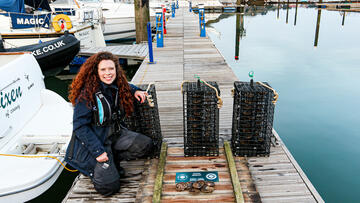 Restoring the oysters to Conwy Bay

In a bid to restore native oyster populations, and in turn see the return of healthy coastal waters, nurseries filled with oysters will be suspended underneath marina pontoons in Conwy Marina and Deganwy Marina of the River Conwy. The nurseries create a micro habitat acting as a maternity ward to the next generation of oysters. These oysters will begin reproducing over the next few months, releasing millions of baby oysters, known as larvae, into the ocean.

“Conway Bay is a designated Special Area of Conservation with unique underwater habitats and important marine plants and wildlife, making it the perfect location to restore 1,300 native oysters into protective nurseries to help habitats thrive.”

“Now the oysters are in their new home in the marinas, they will almost immediately begin their important work each filtering 200 litres of water a day. In the coming months the oysters will start to produce the next generation of the oyster population, by releasing larvae which will then be carried out by the water hydrodynamics and settle onto the seabed. In turn we hope that the project will help to create cleaner water, healthier fisheries and plentiful marine biodiversity in Britain,” explained Celine Gamble, Wild Oysters Project Manager, ZSL.

The history of Conway Bay and native oysters

The project has partnered locally with the School of Ocean Sciences at Bangor University, a local project officer will help to monitor and care for the newly placed oysters as part of The Wild Oysters Project.

“Native oyster populations, local to Conway Bay in the Menai Strait near Caernarfon and Bangor, were highly prevalent in 18th and 19th century, with Welsh oyster boats reportedly landing 8,000 oysters daily. We know that oysters once thrived in the local area, forming an important part of the local marine ecosystem, now we have the opportunity to restore native oyster populations which will provide important ecosystem services.”

“Thanks to players of People's Postcode Lottery we hope to see healthy, resilient, coastal waters in Conway Bay and make a remarkable difference to the future of wild oysters. They are the superheroes of our oceans,” said Local Project Officer for the Wild Oysters Project, Maria Hayden-Hughes. 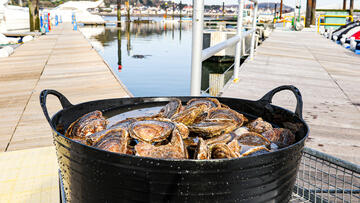 The project's progress so far

The project, which spans the UK, has now installed 94 of 141 planned nurseries underneath marina pontoons across Wales and North East of England.

Laura Chow, Head of Charities at People’s Postcode Lottery, said: “With just a few known native oyster populations remaining in Wales the release of the project’s native oysters into Conway Bay marinas is a huge milestone, all possible thanks to the support of players of People’s Postcode Lottery. Oysters are an important part of our ecosystem and the Wild Oysters project will not only support our oceans but help educate and share the importance of these ocean superheroes with thousands of volunteers, school and university students, and local community groups.”

British Marine Environment Executive, James Scott-Anderson, said; “To have the direct involvement of marinas as part of this project is enabling the industry to become more sustainable, and playing a key part in the future of our oceans. To have these sites in Wales, with local community involvement, is part of this unique partnership and a big step on the road to restoring native oysters in the UK.”

The Wild Oysters Project will deploy the final 1,300 oysters in Scotland in the coming weeks to continue to support the restoration of oysters.