A lioness with a mystery illness, an agoraphobic camel and a sea lion colony prepping for a cross-country move are just some of the stars of a brand-new documentary, airing on ITV this month.

London Zoo: An Extraordinary Year is a new fly-on-the-wall series filmed at the iconic London Zoo and its sister site Whipsnade Zoo in Bedfordshire during the nationwide lockdown – episode one airs at 9pm on Thursday 24 September, with the second airing at the same time on 1 October.

ZSL, the international conservation charity behind the two world-famous Zoos, granted exclusive access to award-winning production company October Films within days of lockdown being enforced, with the team on site filming right through to the Zoos’ emotional reopening days on 15 June. 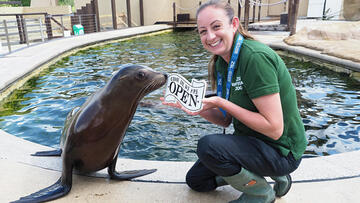 The cameras followed the Zoos’ teams as they dealt with the highs and lows of zoo life, while facing a global pandemic and capturing how social distancing measures created new challenges for zookeepers.  From remote training sessions for vets on how to scan a pregnant okapi, to weighing kune kune pigs from afar, many usual processes had to be adapted, but lockdown also provided some positive opportunities.

Camel keeper Mick Tiley was able to spend extra time coaxing homebody Genghis the Bactrian camel for a walk around London Zoo, while sea lion keeper Alex Pinnell was not-so-secretly thrilled to spend extra time with her beloved pinnipeds, whose move to another zoo was paused due to the pandemic.

ZSL’s Chief Marketing Officer, Nigel Campbell said: “ITV’s cameras captured a truly momentous time in ZSL’s history, the longest period we have ever been closed to the public for in our 200 years. We’ve grown from the world’s first scientific zoo into a world leading conservation charity, but the prolonged closures of our Zoos was the most challenging time we’ve ever faced, and has put us under huge strain –  this programme shows the incredible resilience, dedication and humour of our people, whose priority is always the animals.”

Following the animals and zookeepers at the 200-year-old institution, the documentary provides viewers with an exclusive glimpse into what life was like for those who jobs meant they couldn’t stay at home, and the animals they care so deeply for.

The keepers’ connection and dedication to the animals shines through, from elephant keeper Stefan hoping for a pachyderm pregnancy to being witness to Tara the big cat keepers’ anguish when Indi the lioness is unwell with a mystery illness that results in major surgery.

Campbell added: “Our Zoos are famous for the amazing animals, but this is a chance for viewers to see how amazing our people are too. Be prepared to fall in love with everyone on the programme – human and animal!”

Tune into ITV at 9pm on Thursday 24 September and Thursday 1 October to catch London Zoo: An Extraordinary Year.