‘CSI of the Sea’ secures ten-year commitment from UK government

Scientists responsible for investigating the causes of whale and dolphin strandings around the English and Welsh coastline have secured vital funding for the next decade, for the first time in the project’s 30-year history. 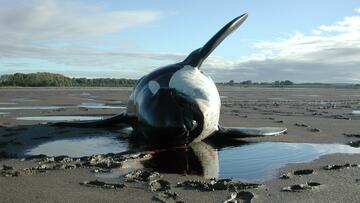 The CSIP (Cetacean Stranding Investigation Programme) coordinates the investigation of all cetaceans (whales, dolphins, porpoises), marine turtles and large-bodied sharks that strand around the coast, helping to provide an insight into the threats these species face and the overall health of the seas around the UK.
Responsible for one of the world’s largest datasets on strandings and causes of mortality, the CSIP has now been given support from 2021 to 2031 from Defra and the Welsh Government – its longest term contract to date. Previous contracts had been granted for no more than three years at a time, and this new decade-long commitment gives CSIP’s scientists the opportunity to commit to longer-term research projects as well as expanding their remit, with an additional pilot study to investigate the causes of seal mortality in the region.

Cetaceans regularly strand around the UK coast, and the reasons behind this are varied and complex – and would remain largely unknown were it not for the work of CSIP.  Coordinated by ZSL (Zoological Society of London) along with current partner organisations the Natural History Museum, Marine Environmental Monitoring, Cornwall Wildlife Trust Marine Strandings Network and Cornwall Marine Pathology team, the CSIP has recorded data on more than 17,000 cetacean strandings in the UK over the 30 year period since its inception in 1990, carried out over 4,500 post-mortem examinations and maintains an internationally important tissue archive from a wide range of vulnerable marine species.

During the last 30 years, the CSIP led the first ever study to provide evidence of by-catch being the cause of a mass mortality of common dolphins, helped discover that whales can suffer from ‘the bends’ and provided the first evidence of violent and fatal interactions between bottlenose dolphins and other cetacean species.  Through its long-term collaboration with the Centre for Environment, Fisheries and Aquaculture Science it has also produced the world’s largest dataset on chemical pollutants in cetaceans. Earlier this year it revealed another impact of the lingering chemical polychlorinated biphenyls (PCBs) which although now-banned are still affecting the fertility of male harbour porpoises – threatening the future breeding success of the species. 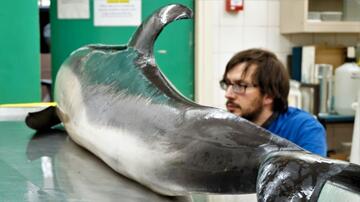 CSIP project manager Rob Deaville from ZSL’s Institute of Zoology said: “Given the challenges facing many publicly-funded projects right now, we’re absolutely delighted that Defra and Welsh Government have recognised the ongoing importance of our work and committed to a decade more of this vital research.

“Through our research we are able to shed light on the lives as well as the deaths of these iconic marine species, which can be difficult to study in the wild through other means. We want to learn more about the pressures these fascinating species face and how human activities impact on them, with the ultimate goal of trying to improve their long-term conservation status in and around the UK”.

Rebecca Pow, Environment Minister, said: “It’s always distressing to hear about the strandings of marine mammals around our coast. The Cetacean Strandings Investigations Programme has been conducting important work since 1990 to find out more about the varied and complex reasons as to why this can happen.
“I am delighted that we are now able to offer long term support for the scheme with a new 10 year contract. This means that ZSL will have the certainty to commit to longer-term research to help us address threats to our precious marine life.”

Rob Deaville added: “Over the course of the next ten years, we look forward to continuing our investigation of strandings with the UK public’s help. We’re reliant on the UK public to report strandings and urge anyone who spots a stranding to call the national hotline number on 0800 652 0333.”