Working with communities in Philippines to protect pangolins

Chai Apale is the Project Manager for ZSL’s Philippine Pangolin Project. Chai and the project team are working to conserve the Philippine pangolin by working with local communities and law enforcement in the Palawan region of the Philippines.  Here she takes us through some of the work that ZSL’s newest pangolin conservation project has been doing.

The Province of Palawan is a biodiversity hotspot in the Philippines and home to the endemic Manis culionensis, an Endangered pangolin species locally known as ‘balintong.’ According to available data, their populations are estimated to have halved over the past 30 years due to poaching for local consumption, national and international trade, and habitat loss. Thus, making ‘balintong’ an urgent priority for conservation attention. 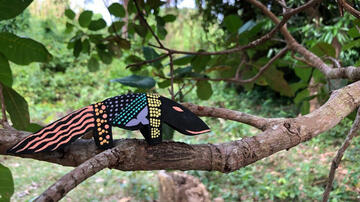 To complement the existing conservation initiatives of the government and other non-government organisations, ZSL-Philippines recently launched the ‘Safeguarding the Philippine Pangolin’ Project. This project aims to reduce balintong poaching and trafficking through evidence-based conservation planning, local site-based protection, increased law enforcement and community engagement. Team Balintong, composed of five Filipinos and a PhD student from the Institute of Zoology, are working together to implement the project. 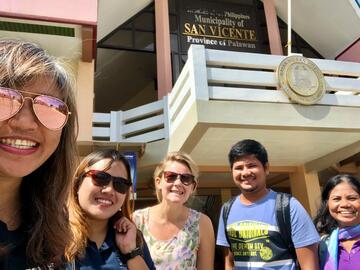 Working with local communities in Philippines

Team Balintong’s first major activity is conducting a large-scale community-based local ecological knowledge (LEK) survey across the province of Palawan. Comprised of almost 15,000 km2 with a vast mountain range running through the islands spine, this is no small task! Targeting over 1000 households across 74 villages/barangays, we hope to assess the status of ‘balintong’ across existing and candidate protected areas in the province. The research will provide the first detailed assessment of the current regional status of ‘balintong’ and will provide new information on the threats facing the Philippine pangolin to better understand local beliefs and attitudes about the species.

First things first, however, and before we can survey anywhere we have a number of important visits to make. In the Philippines, it is important to conduct courtesy calls at the Mayor’s Offices and at the Barangay/Village Halls to formally present the team and the project to the mayor and barangay captains, respectively. For the past two weeks, our team usually start the day at 8:00AM, stopping by at the barangay hall and meeting with the barangay officials to gather information about the area. Our target is to interview 18 households per barangay per day.

Once we’ve completed our courtesy calls we can get on to the interviews. But, this isn’t as simple as you might think!  Locating puroks (the neighbourhoods within a village) or even just going to the different barangays has always been a different kind of challenge and adventure for the team. We need to take unpaved roads, go through scenic (and often VERY bumpy) routes and sometimes, cross locally made wooden bridges. As always, though, we conduct safety checks first!

Once we are in the purok, local community organisers (LCOs) Ronald, Josefa and Darlyn conduct the LEKs with the different households. Local people offer them to come inside their houses, but sometimes they interview them with a view. Meanwhile, Lucy and I do the Key Informant Interviews (KII) with local individuals who have been identified as having good knowledgeable about pangolins. It is an inspiring and heart-warming experience and we are always met with such a warm welcome. It’s a privilege to get to know more about them and their stories.

Fieldwork is exhausting, but meeting people and hearing their stories, encountering different kinds of adventures and even having debriefing sessions under a tree on a bridge, is definitely worth it! On top of these, we also get free buko juice as gifts from the locals and we are treated to picture-perfect views. I am, definitely, lucky to be a part of this team because we get to travel across the Philippine’s last frontier while doing our share in conserving the endemic and threatened ‘balintong.’

From working with small communities in the Philippines to influencing governments across the world, we are always there for nature.