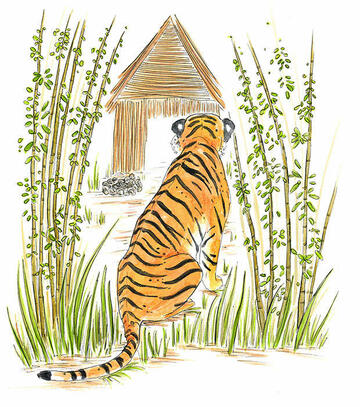 Kemala has been with her family for almost two years.

She no longer looks like a cub, in fact she’s almost as big as Mum - and the den is much too small for all four of them.

They all go hunting together now - which is just as well, because as the cubs’ size has grown so have their stomachs.

Kemala and her brothers no longer play as much as they used to, preferring to nap together in the shadow of a tree until the hot sun sinks towards the horizon and they can set off to hunt.

Her bright orange eyes allow her to see so well in the dark that she can sneak up on her favour-ite snacks, wild boar or deer, when they’re least expecting it. She creeps up, waits, waits, waits…until the timing is just right, then Pow! She springs out of the bushes.

Kemala is strong, her belly is nearly always full and everything in the jungle is hers for the taking. Sleep, eat, repeat. Life is perfect.

But then one day. Something happens. A new tiger arrives.

Kemala has never seen another tiger, neither have her brothers. They rush behind Mum, unsure of what to do. The new tiger is huge - much bigger than Mum. His legs are thick and muscly, and he must be a good hunter because his belly is round and well-fed. He sniffs the air and moves towards them.

Kemala and her brothers watch as Mum faces him, growling loudly, arching her back and ex-tending her claws. The two tigers walk in circles, then …suddenly…Mum seems to relax.

What is going on?

Kemala turns to her brothers before realising - they’ve gone. She catches a glimpse of one of their tails as they disappear into the jungle and realises it’s time to leave. Mum’s ready for more cubs.

She heads into the jungle without looking back. She’s a grown tiger now, she can handle things on her own.

Walking for hours, and hours, she crosses rivers, sunlit glades and fallen tree trunks. She starts to pick up new smells... birds, monkeys, other tigers. She keeps going.

Suddenly she smells something else - the same as the small black box that used to click at them. But it’s much stronger here. She creeps forward carefully, crouched low, keeping to the shadows. Ready to fight or flee.

She enters a clearing and finds a cave but, instead of rocks like the den, it’s made of sticks. The jungle has gone quiet - she can’t hear the normal shrieks of macaque monkeys or calls of horn-bills.

Always the bravest of her litter, Kemala is determined to investigate. She moves towards the cave entrance and pokes her head in.

‘AHHH!’ inside something screams.

It’s not an animal she’s ever seen before. It stands on its back legs with spindly arms and a tuft of fur on its head.

She doesn’t know who’s more scared, her or the strange animal, but she dashes out of its den as fast as her paws can take her.