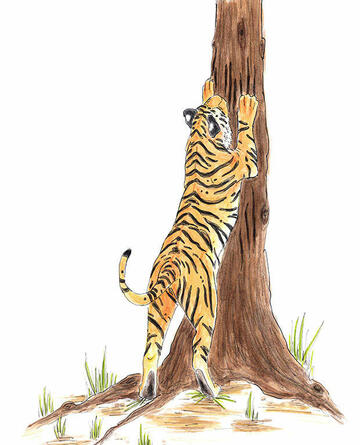 Kemala journeys deeper and deeper into the jungle, never stopping for long.

She’s thinner than she once was. The good times of plentiful food provided by Mum are over, but she’s quicker now, and wiser too. Occasionally she catches the scent of another tiger or the strange animal in the den made of sticks, and immediately leaves in the opposite direction.

Every so often she passes one of the little black boxes attached to tree trunks and they snap at her.

She has learnt to become invisible. Her orange and black stripes blend perfectly with the dap-pled sunlight from the trees above and the dead leaves on the jungle floor. She flits silently from grasses to tree trunk to bushes. The animals clever enough to spot her before it’s too late keep out of her way - which suits her just fine. This is her jungle, and she is untouchable.

As Kemala pads through the forest, the moon bright and low, she smells something - delicious, delicious boar.

Slipping through the undergrowth, she keeps low until she spots it. A boar carcass, just lying on the forest floor. That’s strange…why has no one got their jaws onto it yet?

Something zings across the floor and around her paw. She tries to run, but it’s got her. Thin, tight material, slicing into her paw. She thrashes, hissing and growling, but every movement makes it tighter, cutting into her fur. She can’t escape.

All night she wrestles with the material to no avail, her paw bleeding.

Then she smells it.

She snarls - she can hear their voices, their feet crunching through the undergrowth.

She spots one, walking in its strange upright way. It’s seen her. It yells and starts to run towards her. Followed by two others - making noises she can’t understand.

She hisses and snarls, she won’t go down without a fight.

‘Don’t worry, we’re going to help you! We’ve been following you on the camera traps. This is a dangerous area.’

She snarls, bearing her teeth.

Then one raises something in its hands, long and black and

Kemala starts to open her eyes, everything seems fuzzy, she feels woozy. She starts to get up on her paws but her legs are all wobbly and she collapses.

She can hear the sound of singing, loud singing. She can see up into a canopy of luscious green trees and birds, birds everywhere.

Above her a fuzzy, orange flash swings past, an orang-utan. It whoops out across the jungle and disappears into the luscious greenery.

She slowly gets up to her paws. Ouch, one hurts. She goes to lick it but it’s covered in a material wrapped around it. She tries to walk on it, it’s not so bad.

She looks around. She recognises this place. It’s not too far from the den where she was born. She pads around gently, starting to feel more normal. Slinking through the undergrowth she star-tles a big feathery bird.

It cries in alarm and flaps off. Behind her she hears the click of the little black box.