Chapter One - The Banyan Tree 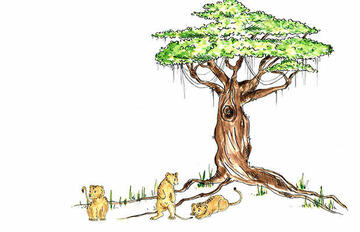 His first few days were spent as a squirmy ball of fluff, blind and completely helpless. He and his two sisters spent all day drinking milk, mewing at his mum and snoozing in her belly fur.

But now he’s a bit bigger - almost the size of a jungle cat he once spotted before running away as fast as he could - and he can see, run and pounce. He has bright blue eyes and a speckled coat. It glimmers silvery grey, rather majestically in the sunshine - although it is still… quite… fluffy.

He and his sisters love playing together. And when they’re not sleeping, or glugging milk greedily, they spend most of their time scrambling around in their bit of the forest. Getting braver by the day, they tackle and wrestle each other, splatting Mum’s flicking tail and chasing anything they can - like spiders, lizards and… well sometimes leaves.

Mum is pretty fun, she bats them around with her huge paws and brings them insects to play with. But she also insists on licking them a lot - and she has a very rough tongue. Sometimes her licking is so fierce they get knocked off their paws - and then she starts all over again.

Every morning their home is filled with the sound of roaring lions. When one starts in the distance they all join in across the forest. Sunny’s never seen another grown-up lion but he takes part in the chorus, roaring with all his might. Right now it does sound a little bit like a squeak…but it’s definitely getting stronger…sort of.

He’s never gone further than a few metres from the giant banyan tree where he and his sisters were born. Full of massive branches, swinging langur monkeys, and lots of tangly roots, it’s always given them shelter - especially when Mum disappears for almost a whole day every so often.

But something’s up, today she wants to take them somewhere new. On shaky paws they start to follow her through the thorny forest, mewing. Sunny doesn’t want to leave, he wants to stay where it’s safe and play and sleep and drink milk.

But she marches on, her tail sticking in the air so they can see her even when the bushes grow thick. As they venture forward, the banyan tree behind them gets smaller and smaller until it disap-pears completely, the chirruping of its langur monkeys fading into the distance.

And everything before them is unknown.

There are only about 650 of these awesome animals living in the wild and being situated in just one area makes them extremely vulnerable. With your help we’re working to protect them and hun-dreds of other animals around the world.